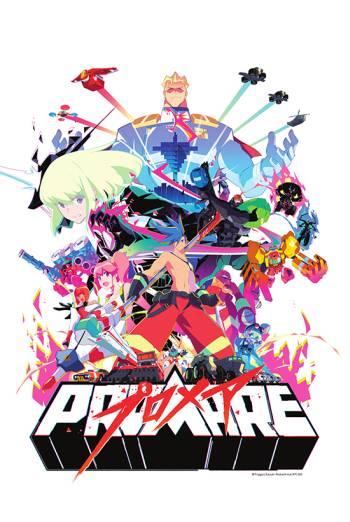 When fires sweep across the world, some of the survivors acquire special pyrokinetic gifts. Thirty years later, those who mutated are shunned by society. But as tensions grow hotter, the two peoples must find a way to unite to uncover a conspiracy. This Japanese anime is directed by Hiroyuki Imaishi.

A generation ago, the Great World Blaze enveloped the earth, leaving humanity in ruins and the global population halved. A small portion of those who survived the heat picked up the amazing ability to manipulate fire.

Thirty years later, those mutated by the blaze have become known as the Burnish and are cast aside by society, with the people of the city Promepolis fearing their power.

Hurting, a terrorist branch of the Burnish, headed up by Lio Fotia (Johnny Yong Bosch), hurl flaming attacks at the city in response. An elite team of firefighters, Burning Rescue, keep the blaze at bay. Galo Thymos (Billy Kametz) is within their ranks.

Galo betters Lio and captures him during one attack, only for the terrorist leader to escape his cell with a band of Burnish and outwit the Burning Rescue member. Unarmed and beaten, Galo is allowed to live but learns from Lio that the governor, Kray Foresight (Crispin Freeman), is experimenting on the imprisoned Burnish people, slowly draining them one-by-one, as he learns to manipulate their powers.

Tortured by the news of mass suffering at the hands of his leader, Galo feels uneasy, no longer sure whether his fight is just. The distinction between good and evil is no longer black and white, and Galo must decide where he now stands in the fight against terror.