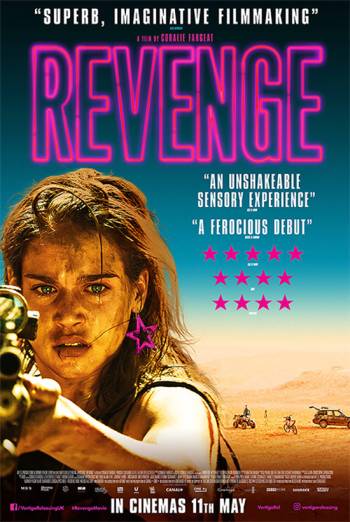 A mistress turns into a lethal murderer after she is assaulted and left for dead in the desert, in this gory, horror-thriller from French director Coralie Fargeat.

Seduced by the luxury life and all that comes with it, Jen (Matilda Lutz) has no qualms about boarding a helicopter and joining her married, millionaire boyfriend Richard (Kevin Janssens) for an extravagant weekend at his desert villa. They begin what’s meant to be a clandestine weekend of indulgence, not knowing it’ll end in a ruthless bloodbath.

Richard’s friends Dimitri (Guillaume Bouchede) and Stan (Vincent Columbe) show up for their hunting trip early, and things begin to take a sinister turn. A night of hardcore partying leads to a miscommunication between Stan and Jen – which escalates into her worst nightmare.

Believing Jen has shown an interest in him, Stan makes a move – and when she rejects him, he brutally assaults her. Violated and distraught, she turns to Richard for justice.

But rather than help her, he pushes her off a cliff.

Fuelled by animal rage and survival instinct, Jen rises from the dust and sets out on the warpath, with only one thing on her mind: revenge.

The feature-length debut from director Coralie Fargeat (Reality+), this gory thriller has received critical acclaim from die-hard horror fans and film critics alike. It debuted at the 2017 Toronto International Film Festival’s Midnight Madness event and features Matilda Lutz (The Divorce Party) as the prey-turned-hunter who will stop at nothing to eliminate her enemies.

Get all times & tickets
All films at Bromley
Also showing