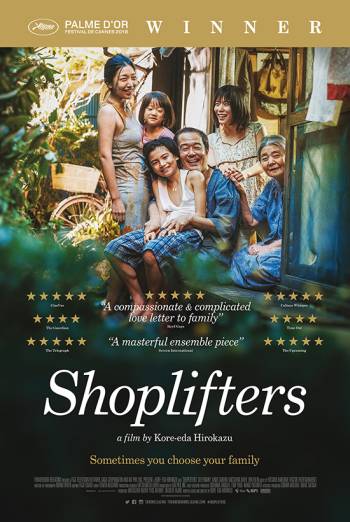 A poor family who rely on crime to get by take in a young runaway in this highly acclaimed drama from Japanese director Hirokazu Kore-eda. Shoplifters took home the Palme d’Or at the 2018 Cannes Film Festival and features a standout cast, including Lily Franky and Kirin Kiki.

Crowded together in a small home in Tokyo, a poor family lives life on a shoestring, woven together by shared habits of sneakiness and deceit.

To make ends meet, Osamu (Lily Franky), his wife Noboyu (Sakura Andô), and his young son Shota (Kairi Jyo) steal, while his daughter Aki (Mayu Matsuoka) finds seedy work in the city’s red light district. Hatsue (Kirin Kiki), the children’s grandmother, donates her small pension to help towards the bills, but it’s never quite enough. They are a family of shoplifters.

One day, after pinching groceries for dinner, Osamu and his son come across a little girl (Miyu Sasaki), shivering and alone, hiding in an alley. In an unlikely moment of tenderness, Osamu takes her home to feed her and get her off the freezing streets.

As the frightened child lets down her guard, it becomes apparent that something isn’t quite right –covered in bruises, it seems she’s been severely mistreated by whoever she has run away from.

As one day turns into two, and the weeks roll on, the family begin to accept the little girl, who they call Juri, as one of their own – which means it’s time to show her the tricks of the trade.
But when her face appears on TV, marked as ‘missing’, everything becomes much more complicated. Right and wrong are thrown into question as this dysfunctional family wrestles with the choices they have made. Secrets spill out as their shoestring unravels…

From iconic Japanese director Hirokazu Kore-eda (The Third Murder, Like Father, Like Son), Shoplifters (or Manbiki Kazoku, in Japanese) won the acclaimed Palme d’Or at Cannes Film Festival 2018 and has received high praise from critics around the world. Lily Franky (The Last Shot in the Bar) stars as the crooked ringleader, alongside Sakura Andô (Reminiscence), and acclaimed actress Kirin Kiki (Rage).