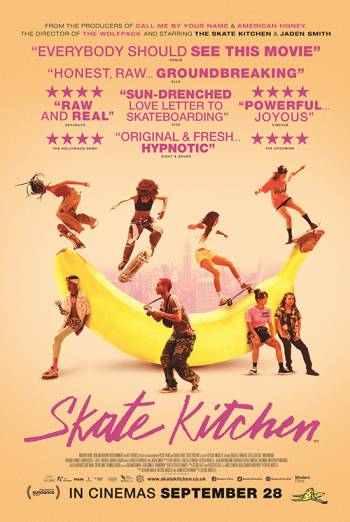 A lonely girl finds her tribe in the underground NYC skating subculture, where girls become women through sport and friendship. This coming-of-age film comes from director Cyrstal Morsell, and stars Rachelle Vinberg, Elizabeth Rodriguez, Jaden Smith, and The Skate Kitchen.

Camille (Rachelle Vinberg) has a passion for skateboarding. The only problem is she’s always alone, with no friends who feel the same about her pastime of choice. Feeling trapped by her domineering mother (Elizabeth Rodriguez), she rolls through the streets, searching for some sort of purpose.

Almost by luck, she discovers a group of like-minded women in New York City’s Lower East Side who share her passion. Traipsing throughout the city, without a care for the snobby upper classes whose boutiques they roll by, the group form an intense bond, a friendship Camille could’ve only dreamt of.

Nothing is off-limits for this friendship group, whether it’s stacking hard at the skate park, or talking about periods, sex, and life’s other intimacies. When Camille’s mother chastises her for spending too much time out of the house and away from her studies, her friends are ready to rescue her from her suburban prison and take her in.

It may feel like nothing can come between the girls and their bond, until Camille falls for one of her friend’s ex-boyfriends (Jaden Smith). Choosing between her teenage passion and the women who she loves like sisters, Camille learns a greater lesson in female friendship than she could have ever anticipated.

This unique film from Crystal Moselle – who previously documented the lives of a once imprisoned family in indie hit The Wolfpack – shines a light on the subculture of women’s skateboarding.