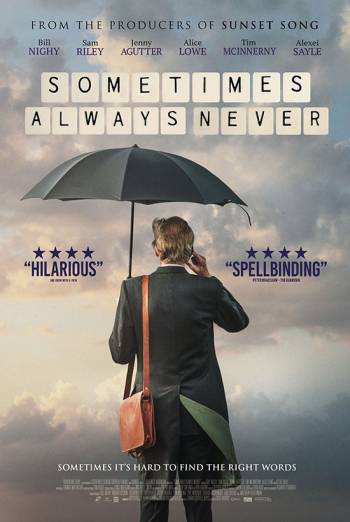 For many years, Alan has been tirelessly searching for his favourite son, who went missing after a family scrabble game went wrong. But having neglected his younger son all this time, he must begin to repair their relationship – after all, he can’t afford to lose them both. Alice Lowe, Bill Nighy, and Sam Riley star in the quirky British comedy.

Alan (Bill Nighy) is a stylish and sophisticated tailor from Merseyside, with quips as sharp as his suits. But for some time now, a dark cloud has been hanging over his head.

Many years ago, after a game of scrabble turned sour, his son Michael walked out of the family home, never to return. For years, the mystery of his son’s disappearance has tortured Alan – and it’s taken a toll on his other son, Peter (Sam Riley).

When playing an online game of scrabble, Alan goes head to head against a player who he believes to be his missing boy. Desperate to track him down, he dives into a rabbit hole of amateur detective work, which takes him down some dodgy paths…

But as he fixates on finding his missing boy, it becomes clear that his relationship with Peter is suffering. Now all grown up, with a wife (Alice Lowe) and teenage son (Louis Healy) of his own, Peter is tired of being neglected in favour of a brother who abandoned them both years ago.

After spending most of his life wrestling with letters, will Alan be able to find the right words before it’s too late?