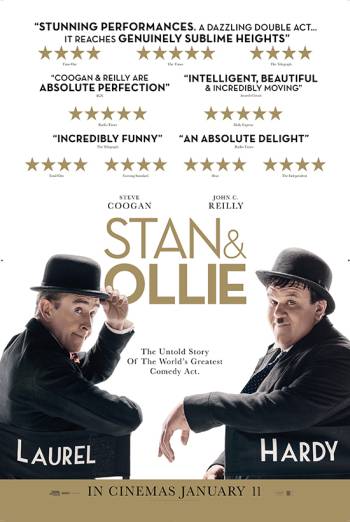 One of the world’s greatest double acts, Stan Laurel and Oliver Hardy embark on a national farewell tour up and down Britain, but times get tough when unresolved conflicts resurface and Hardy’s health puts pressure on their long-standing friendship. A heart-warming biopic starring Steve Coogan and John C. Reilly.

But the show gets off to a slow start and their glory days seem like a distance memory when they arrive on stage to be greeted by underwhelming crowds.

Eventually their charm and humour pays off and they manage to win over the hearts of the public, attracting both old and new fans. But the duo struggle to put the past behind them and buried conflicts resurface when Laurel accuses Hardy of betraying him, putting their long-standing friendship to the test. To add to the pressure, Hardy’s health is deteriorating and his doctor warns him not to go on stage due to his heart condition.

The beloved duo must figure out a way to put their differences aside for the sake of their friendship and Hardy’s wellbeing.

Discover the fascinating untold story of Hollywood’s greatest double act. Stan and Ollie is directed by John S. Baird, famed for his 2013 adaption of Filth and stars real-life comedy legends John C. Reilly (Chicago) and Steve Coogan (Alan Partridge). The film is penned by Jeff Pope, who has previously collaborated with Coogan on Oscar-nominated screenplay Philomena.

All films at Cwmbran
Also showing
BTS Break The Silence: The Movie