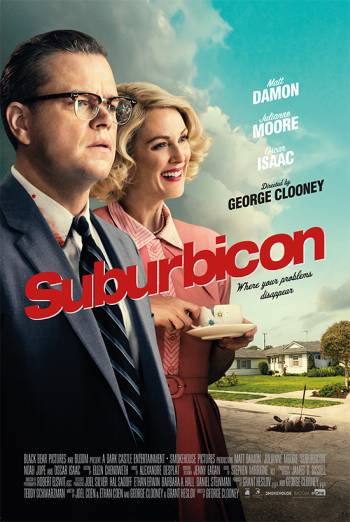 The perfect veneer of a deceptively peaceful community is shattered when a father is forced to defend his family against an unsavoury bunch of mobsters.

Welcome to Suburbicon, 1959. A seemingly perfect place for breadwinner, Gardner Lodge (Matt Damon) to raise his preteen son along with his apple-pie wife, Rose (Julianne Moore). But all is not as it seems in the Lodge household… or in Suburbicon.

When the family are terrorised by two lowlifes during a horrific home invasion, their lives are turned upside down and Gardner finds himself having to square up to a vicious mob of gangsters.

In doing so, he opens up a huge can of worms, triggering a revenge tale of epic and violent proportions – and a few impeccably timed comic moments.

Will Lodge make it out alive or spiral towards oblivion? Is he really all he seems, or has he been leading you a merry dance all along? And what about Lodge’s eager-to-please sister-in-law, Margaret?

Suburbicon is an intriguing mix of mob action, murder, richly dark humour and social satire, all set against the ‘nothing ever happens here’ backdrop of impeccably manicured lawns and pristine houses that is Suburbicon – a town so incredible in its bland conformity the events that unfold on its doorstep are even more outrageous.

The Coen brothers (Fargo, No Country for Old Men) originally penned the script, which features their trademark blacker than black humour, as well as twists and turns aplenty. George Clooney (Money Monster) not only co-rewrote the script but also directed and produced, making it easy to see why Suburbicon keeps you glued to the action.

Matt Damon (Oceans Eight) turns in a brilliant performance, alongside Julianne Moore (Kingsman: The Golden Circle) in her dual role.

What to say about these five Oscar-tipped films