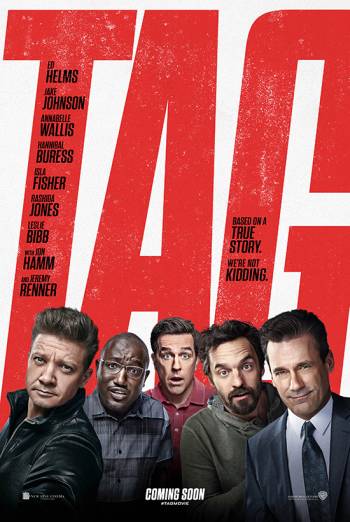 Each year, a group of old school friends meet to play a month-long game of tag. But this time, a wedding of the only undefeated player conflicts with the game – the war is on to try and catch him.

Just because they’re all grown up, it doesn’t mean the fun has to stop.

Every May, a group of five highly competitive school friends meet up to play a month-long game of tag, which started way back in first grade. They must run, hide, and do everything they can to escape being tagged ‘it’.

But this isn’t you’re typical bit of schoolyard entertainment.

For the past 30 years, the game has seen them travelling across the country – putting their lives, relationships, and jobs on the line to try and catch each other. Each year, it gets bigger, better, and more competitive.

However, this time around, the game coincides with the wedding of the only undefeated player Jerry (Jeremy Renner). With a nearly 30-year winning streak, Jerry’s big day seems like the perfect opportunity to finally take him down.

But what should be an easy win turns into a full-blown showdown when he realises they’re coming to get him.

Based on true events that featured in The Wall Street Journal, Tag is a hilarious comedy packed with laughs. The film stars a host of well-known actors including Jeremy Renner (The Avengers), Ed Helms (The Hangover), Jake Johnson (Jurassic World), Annabelle Wallis (Peaky Blinders), Hannibal Buress (Neighbors), and Isla fisher (Wedding Crashers). Tag is directed by Jeff Tomsic and written by Rob MicKittrick and Mark Steilen.