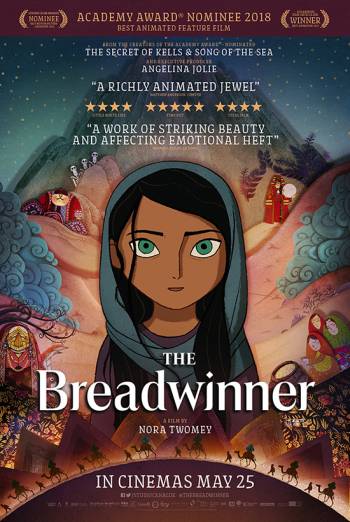 Angelina Jolie is the executive producer of this beautiful animated film, based on the best-selling novel by Deborah Ellis, about a young Afghan girl (voiced by Saara Chaudry) who risks everything to help her family survive.

Afghanistan, 2001. Parvana is a girl who has lived her entire life under the shadow of the Taliban. Even at 11-years old, she knows there are rules that she must follow – or suffer the consequences.

As a young female living within a strict regime, her voice counts for almost nothing. But despite the oppression she faces, her imagination knows no bounds. Her father tells her stories that spark her curiosity, inspiring her to dream of all the things she might accomplish someday.

But when her father is suddenly arrested, Parvana’s life is turned upside-down. Without any adult male relatives at home, her mother is unable to leave the house to buy food and support her family.

Desperate to help, Parvana decides to risk everything. She cuts her hair, ditches her traditional clothes, and ventures into the world alone, masquerading as a boy.

Each step she takes is riddled with danger and a strange sense of freedom, as she makes new friends, faces old enemies, and tries to find a way to see her father again.

Based on the best-selling novel by Deborah Ellis, The Breadwinner is a beautiful film about suffering and survival, and how the power of storytelling can help us to conquer all.

Nominated for Best Animated Feature at the 2018 Academy Awards, the talented cast and crew includes executive producer Angeline Jolie (By The Sea), director Nora Twomey (The Secret of Kells), and up-and-coming Canadian actress Saara Chaudry (Dino Dana), who provides the voice of Parvana.