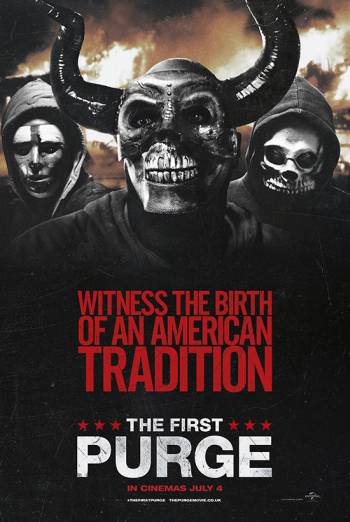 The Purge is the event that has grown to define the country – for better or for worse. This is the story of how the infamous annual night of legalised anarchy came to be. Written by Purge creator James DeMonaco, this gory prequel stars Marisa Tomei, Lex Scott Davis, and Steve Harris, and reveals the shocking anarchy of one night that changed the landscape of the United States.

Crime rates in the US have skyrocketed, and the government is desperate for a solution. In an attempt to regain control, the New Founding Fathers of America decide to implement an experiment that will test the evil – and the good – that exists at the heart of every one of us.

For one night only, there are no rules.

“At the siren, all crime – including murder – will be legal for 12 hours.”

In one neighbourhood only, people will be allowed to do whatever they want – including kill. Spearheaded by a leading psychologist (Marisa Tomei), the aim is to allow society to express the pent-up rage, anger, and resentment that has accumulated beneath the surface.

But they soon discover, “human nature does not obey the laws of politics.”

As the anarchy unfolds, the scene of the experiment quickly becomes a battleground between local citizens and a militant force that is determined to eliminate everyone who lives there. It becomes clear that the government has its own stake in The Purge.

With nobody to call for help, the residents have no choice but to organise themselves and fight back.