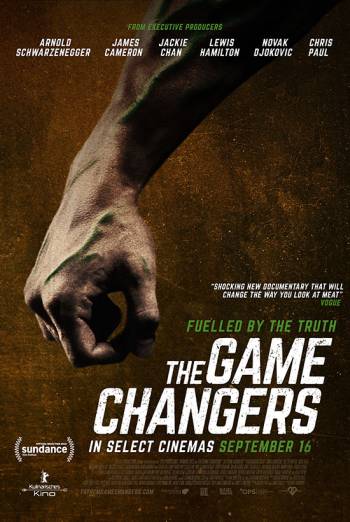 This documentary explores the explosive rise in meat-free dieting in professional sport and the theory that plant-based eating is the way to achieve human excellence. Co-produced by James Cameron, this feature stars some of the world’s toughest, sharpest, and quickest athletes, including former bodybuilder Arnold Schwarzenegger, F1 driver Lewis Hamilton, and strongman Patrik Baboumian.

When US military combat instructor James Wilks suffered a serious injury, the road back to normality looked bleak. Spending over a thousand hours reading up on recovery nutrition, though, he stumbled upon something extraordinary.

Discovering the Roman gladiators, the original professional fighters, trained on a plant-based diet, he began exploring the possibility that animal-free eating might be the way to achieve excellence, despite years of targeted marketing emphasising meat is the ideal way to build strength and size.

Combining innovative, ground-breaking science and real-life stories from meat-free athletes from around the world, this intriguing documentary begins to debunk the myth that meat is the key to elite strength and the perceived notion of masculinity.

Directed and co-produced by Academy Award winners Louie Psihoyos (The Cove, Racing Extinction) and James Cameron (Avatar, Titanic, Terminator: Dark Fate) respectively, The Game Changers might make you consider your own diet and see meat in a totally different way.