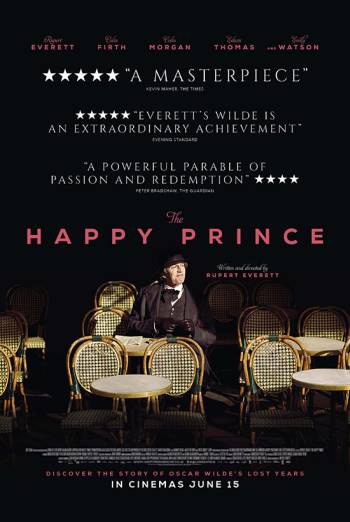 A portrait of Oscar Wilde’s final years in exile and his despair over becoming a shadow of his former self. The film stars a host of familiar faces including Colin Firth (The King’s Speech), Emily Watson (Punch-Drunk Love) and Edwin Thomas (Churchill: 100 Days That Saved Britain).

Literary legend, Oscar Wilde (Rupert Everett) is a well-respected poet loved by all. But he carries a secret that will destroy him…

Convicted in later life for “gross indecency” for having an affair with Lord Alfred “Bosie” Douglas (Colin Morgan), he is exiled to Naples and Paris and kept to hard labour for two years. After his release, he walks around with prowess despite becoming a shell of his former self.

He constantly battles with flashbacks from his greater days and spends money as quickly as he can borrow or blag it. In a desperate plee to save himself financially, he even sells an unwritten play to three separate financial backers.

The Happy Prince is a biographical portrait of Wilde’s life and final years in exile where he observes his own failure with satirical distance. Rupert Everett (Inspector Gadget) makes his directorial debut, having written and directed the drama as well as starring in it.