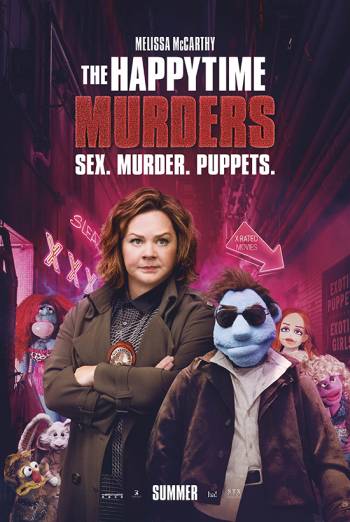 When members of the puppet cast from a 1980s children's TV show are murdered one by one, a disgraced puppet private eye takes on the case. Directed by Brian Henson, son of legendary Muppets creator Jim Henson – buThe Muppets, this is not! This edgy and hilarious adult comedy stars Elizabeth Banks, Melissa McCarthy, and Maya Rudolph.

Set in a world where puppets and humans coexist, puppet private eye, Phil Phillips (Bill Barretta) is on the hunt for the serial killer who murdered his brother and is now murdering cast members from the 1980s children’s beloved puppet programme “The Happy Time Gang”.

He soon discovers that his former girlfriend, Jenny (Elizabeth Banks) is the next target and must cooperate with his ex-partner, Detective Edwards (Melissa McCarthy) to stop the killings. Fuelled with hatred for one another, the duo must put their differences aside to catch the perpetrator.

But when discreditable stories from Phil’s past resurface, the clues start pointing towards the only logical suspect: himself. A hilarious comedy-thriller that will leave you unable to look at a silly string in the same way again.

The Happy Time Murders is adapted from the screenplay by Todd Berger and directed by Brian Henson whose father, Jim Henson, was the legendary creator of The Muppets. Brian Henson also directed The Muppet Christmas Carol and Muppet Treasure Island.

Get all times & tickets
All films at Darlington
Also showing