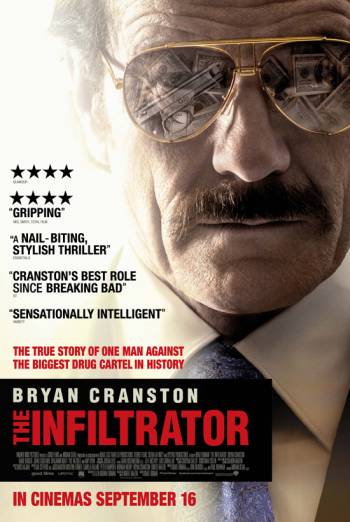 It’s 1986. A multi-national crime ring beats quietly beneath the façade of American normality – and federal agent Robert Mazur is about to go undercover to expose the whole thing.

Robert Mazur is also Bob Musella – a cunning, money-laundering businessman who is working alongside drug cartels and corrupt bankers in the biggest crime ring the USA has ever seen.

And he’s determined to expose the whole thing.

Set in the turbulent world of trafficking and corruption in 1980s America, Mazur is familiar with the demand of undercover life. He is an expert at becoming friends with his enemies, in order to ensnare them in their own damning evidence.

But drug lord Pablo Escobar is no typical dealer.

Head of the most sophisticated crime network that has ever wound its way through the USA, it’s going to take more than a hidden recorder and a sloppy confession to take him down.

Musella will have to become more involved in the underworld than ever before – putting himself at the forefront of risk and danger in his attempts to dismantle the web he is pretending to be a part of.

Based on the life story of federal agent Robert Mazur, and the book of the same name, The Infiltrator is a thriller that pushes the boundaries of action-packed storytelling, and it’s all true.

Directed by Brad Furman (The Lincoln Lawyer), Cranston (Breaking Bad) stars as the headstrong undercover agent, alongside John Leguizamo (Kick-Ass 2) as his gritty partner, and Diane Kruger (Fathers and Daughters), who plays the rookie agent posing as Mazur’s fiancé.