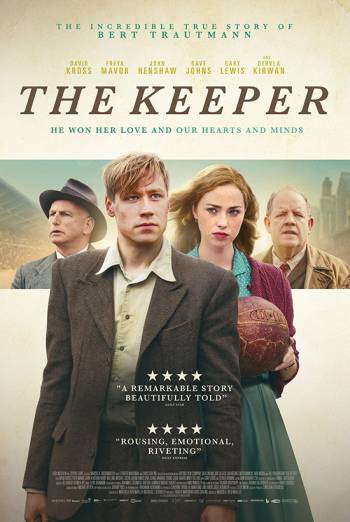 Following his capture during the latter stages of World War 2, a young German changes the outlook of an entire nation as he rises from Nazi villain to footballing hero. The Keeper tells the true story of Bert Trautmann and his journey to become one of the most iconic footballers of his generation, starring David Kross, Freya Mavor and John Henshaw.

Having been captured by allied forces in 1944, Nazi paratrooper Bert Trautmann (David Kross) is sent to a prisoner-of-war camp in north-west England.

Playing regular football in the prison yard, Bert begins to show promise as a young and talented goalkeeper. As the war closes, Bert has grown fond of his new surroundings, so decides to stay in England to pursue a footballing career.

Joining a local amateur team, Bert is the star of the show, in spite of his past, catching the eye of one fan in particular – the beautiful Margaret Friar (Freya Mavor). As Bert’s impressive performances win plaudits, his reputation steadily grows, earning him a move to First Division team Manchester City, with Margaret by his side.

This move sparks controversy across the country. Fans flock to protest the signing of the former Nazi soldier, who would now be playing amongst England’s elite. He’s got all the ability in the world but is it enough to win over an entire nation?

This incredible true story follows Bert Trautmann, from his Luftwaffe days all the way through to becoming a hero of English football. Starring David Kross (Into the White), Freya Mavor (The Emperor of Paris) and John Henshaw (Stan and Ollie), this touching tale of love, hope and success is certainly not to be missed.