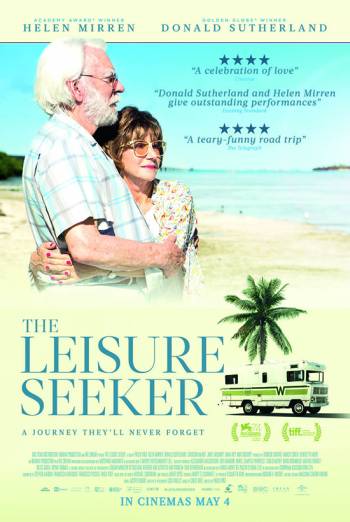 Helen Mirren received a Golden Globe Best Actress nomination for her portrayal of Ella, a loving wife who takes her dementia-plagued husband John (Donald Sutherland) on the road trip of a lifetime in their 1975 camper van.

Ella Spencer (Helen Mirren) and her husband John (Donald Sutherland) are well into their golden years, and it’s beginning to dawn on Ella that there are many things they still haven’t done – and perhaps not a lot of time to do them.

With dementia slowly taking over John’s life, she decides that it’s now or never. In the early hours of the morning, they sneak into The Leisure Seeker – their 1975 Winnebago camper van – and hit the road before their well-meaning (but controlling) adult children can stop them.

Ella wants to take John, a retired professor, to the Key West house his literary hero Ernest Hemingway lived in. As they travel down Route 1, from Massachusetts to Florida, they find themselves in a series of hilarious, hampering, and heart-breaking situations.

Being held up at knifepoint, eating endless hamburgers, and questioning the very foundation of their long relationship – the miles roll away, revealing the struggles they’ve faced throughout the years, and the love that’s held them together.

The Leisure Seeker is written and directed by Paolo Virzì (Like Crazy) and was nominated for Best Film at the 2017 Venice Film festival. Academy Award Winner Helen Mirren (Collateral Beauty, The Queen) reunites with Donald Sutherland (The Hunger Games franchise) for the first time since the 1990 biographical drama Bethune: The Making of a Hero.