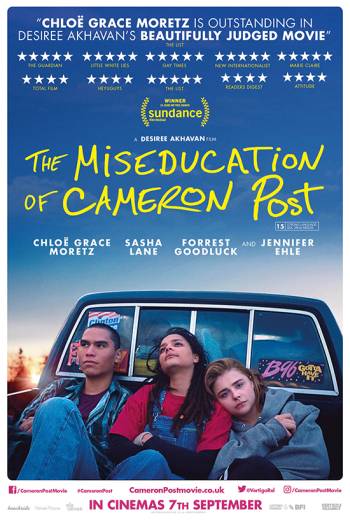 Cameron Post (Chloë Grace Moretz) is sent away to camp by her highly religious aunt who hopes she will be able to be ‘cured’ of her homosexuality, in this highly acclaimed drama about youth, love, and finding the courage to be yourself. Based on the hit young adult novel by Desiree Akhavan, featuring a standout talented young cast including Moretz, Sasha Lane, and Forrest Goodluck.

It’s 1993 and a lot of things are acceptable – overalls, bum bags, choker necklaces – but in Cameron Post’s family, homosexuality isn’t one of them.

An orphan who lives with her strict aunt, Cameron isn’t any different from other teenagers – just like everyone else in high school, she’s trying to figure out who she is by making mistakes and falling in love. But in her case, that involves falling in love with a girl.

Not everyone is accepting of who Cameron is – especially her extremely religious guardians. When she’s caught kissing a girl in the back of a car on prom night, her aunt is horrified and decides the only solution is to send her away to try and ‘fix’ her.

She ends up at God’s Promise, a special Christian camp that promises to help ‘confused’ kids pray away their ‘SSA’ or ‘same-sex attraction’.

However, instead of ‘redemption’, Cameron finds Adam (Forrest Goodluck) and Jane Fonda (Sasha Lane), who are eccentric, rebellious, and just as lost as Cameron is. Together, they try to figure out how to push back against the camp’s well-meaning but misconstrued counsellors, Dr Marsh (Jennifer Ehle) and Reverend Rick (John Gallagher Jr) and learn how to accept themselves for whoever they might become.

Based on Emily M Danforth’s hugely successful young adult novel, The Miseducation of Cameron Post is directed by Desiree Akhavan (Appropriate Behaviour) and has received high critical acclaim, praised for its understated yet sensitive storytelling.

All films at Exeter
Also showing
BTS Break The Silence: The Movie