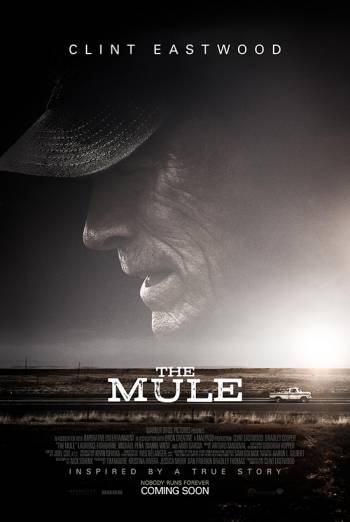 Earl Stone is an elderly horticulturist with a failing business. When he’s offered a quick buck by the cartel to smuggle cocaine into America, it’s too good an opportunity to turn down. But things spiral out of control for the veteran as he struggles with his new-found notoriety. Clint Eastwood directs and stars in this thrilling true story.

World War 2 veteran turned horticulturist Earl Stone (Clint Eastwood) is fighting a losing battle trying to keep his failing florist business above water. When the opportunity for a job as a drug smuggler for the cartel arises, Earl jumps at the chance for the easy money.

Smuggling vast amounts of cocaine over the Mexican-US border in his pick-up truck, Earl proves to be a talented drug mule and finds himself getting deeper into the cartel, becoming responsible for trafficking heavier and more valuable loads.

But nobody runs forever.

Years of success has made Earl a cartel legend, but his escapades have also drawn heavy attention from the unwavering DEA agent Colin Bates (Bradley Cooper).

Past decisions begin to weigh heavily on Earl’s conscience. With his life in constant danger and his family in tatters, he considers betraying the cartel for a chance at redemption – after one more job.

Starring and directed by Clint Eastwood (American Sniper), Bradley Cooper (Guardians of the Galaxy) and Michael Peña (Narcos: Mexico), join this retelling of the extraordinary true story of the investigation into the world’s oldest drug mule and the part he played in the notorious Sinaloa cartel.