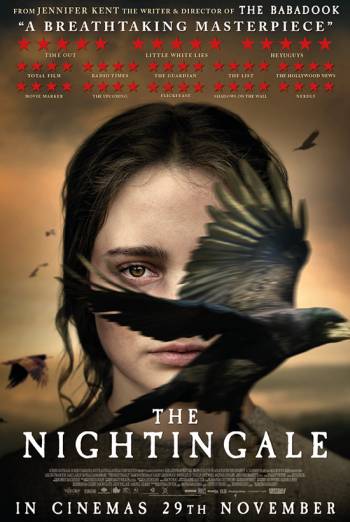 After suffering hideous violence at the hands of her master, Clare tracks him through rural Tasmania in a bid to seek bloody revenge. Set during the Tasmanian Black War, this historical thriller stars Aisling Franciosi, Sam Claflin and Baykali Ganambarr.

Enduring an abusive seven years serving her British master, Hawkins (Sam Claflin), Clare is relieved when her sentence is up, and she can return to freedom with her husband Aidan (Michael Sheasby) and infant baby.

However, Hawkins has taken a liking to his personal servant and refuses her leave, proving his unwavering dominance with traumatic acts.

Shortly after, as the commander is vying for a promotion, he makes haste for the northern city of Launceston, leaving Clare at the unit with the other men. But as she and her family decide to escape, they are captured, and Aiden and her child are killed.

Consumed with thoughts of rage and revenge, the anguished Clare heads out into the bush, determined to find her evil former captor, with the help of aboriginal tracker Billy (Baykali Ganambarr).

She’s escaped a life of servitude, but Clare doesn’t believe she’ll feel free until she makes her abuser suffer.

Brought to us by Jennifer Kent (The Babadook), this harrowing and dramatic Australian thriller is inspired by the true trauma of the Tasmanian Black War. The Nightingale stars Aisling Franciosi (Clique, The Fall, Game of Thrones), Sam Claflin (Peaky Blinders, Adrift, The Corrupted) and newcomer Baykali Ganambarr.