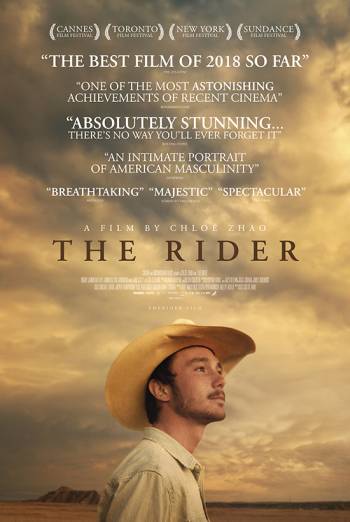 Following a near-fatal head injury, a young bronco rider living in a small-town in America tries to find balance between his passion and his new physical limitations. A stunning feature film from director Chloé Zhao, The Rider has already been nominated for numerous awards on the film festival circuit.

Brady (Brady Jandreau) is a young bronco rider, living for the thrill of the physical and dangerous sport. While riding one day, he takes a fall and ends up with his horse briefly pinning him down. Following the accident, he suffers a head injury that leaves him suffering seizures, and a newfound caution about riding.

But his fears of repeating the accident don’t stop Brady from climbing back on his horse long before his doctors say its safe. Taking his life into his own hands every time he sits in the saddle, Brady must wrestle with his own consciousness to decide whether his passion and livelihood is worth the risk of life-long disability or even early death.

Coupled with this conundrum is his friend’s condition, Lane Scott (played by himself). Once a fellow rider, Lane became permanently disabled following a similar accident while riding. Brady visits him regularly, where he helps his friend to relive his glory days.

The Rider is an immensely touching insight into a certain slice of Americana life, with the actors largely playing versions of themselves. Directed by Chloé Zhao, who rose to fame on the indie circuit with Songs My Brother Taught Me, the film is beautifully shot, artfully directed, and wholly insightful into a lifestyle many have heard of, but know little about.