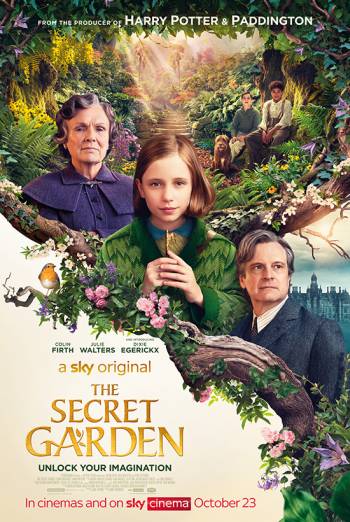 When an orphan girl is sent to live with her uncle on an isolated Yorkshire estate, she discovers a secret garden that is full of magic. The Secret Garden is a modern remake of the 1987 classic, this time directed by Marc Munden and starring Colin Firth, Julie Walters and Dixie Egerickx.

10-year-old Mary Lennox (Dixie Egerickx) was born in India and is the daughter of two wealthy parents. When they die in tragic circumstances, she is sent to live with her uncle, Archibald Craven (Colin Firth), on his remote Yorkshire estate known as Misselthwaite. She’s brought to the house by head housekeeper Mrs Medlock (Julia Walters), who warns Mary to keep herself to herself and not go snooping around.

Since her uncle is rarely there, and with only Mrs Medlock and the maid, Martha, for company, curiosity gets the better of Mary. She decides to explore the grounds and discovers a mysterious garden at the back of the estate that she soon realises is capable of many magical things.

She later chances on a disabled boy, Colin Craven (Eden Hayhurst), who turns out to be her cousin. He can’t walk and has been confined to the house under the strict orders of his father and Mrs Medlock.

Desperate to show Colin her amazing discovery, she tries to find a way to sneak him outside without anyone knowing. Little do they both know, this magical place of adventure will change their lives forever.

From the producers of the Harry Potter series and Paddington, The Secret Garden is an incredible remake of the 1987 classic film based on the timeless best-selling novel. The film is directed by Marc Munden (Utopia) and stars an exceptional cast including Academy Award winner Colin Firth (1917, Mary Poppins Returns, The Kings Speech), Academy Award nominee Julie Walters (Paddington, Mamma Mia! Here We Go Again) and relative newcomer Dixie Egerickx (The Little Stranger).