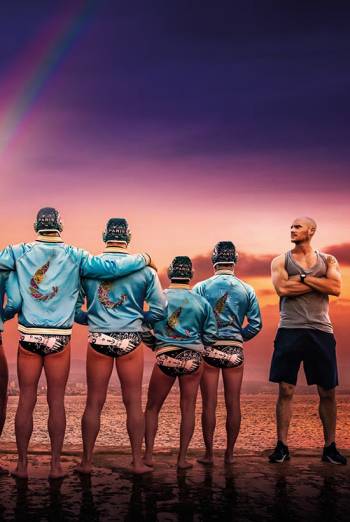 After making a very public homophobic remark, a disgraced world swimming champion is made to work alongside a gay water polo team to earn back public support. This hilarious English-subtitled comedy stars Nicolas Gob, Alban Lenoir and Michaël Abiteboul.

Matthias Le Goff had the world at his feet – decorated Olympian and world champion swimmer, it was all his. But after an explicit and homophobic rant on national television, he suddenly lost the support of his sponsors.

With his reputation in tatters and public perception at an all-time low, he was informed that his participation in the next World Championships was hanging by a thread. The only way to secure his place on the team was to offer coaching for a gay sporting association…

Only when Matthias is introduced to The Shiny Shrimps, an eccentric amateur water polo team, does the acclaimed swimmer realise the enormity of his punishment – the flamboyant men in front of him are far from the focussed athletes he’s used to working with, and are more interesting in the party than the plaudits.

Despite their merry-making, though, there is one thing that will draw their focus – The Gay Games, an eccentric Olympiad celebrating pride. But with this sporting event fast approaching, Matthias doesn’t have long to whip them into shape.