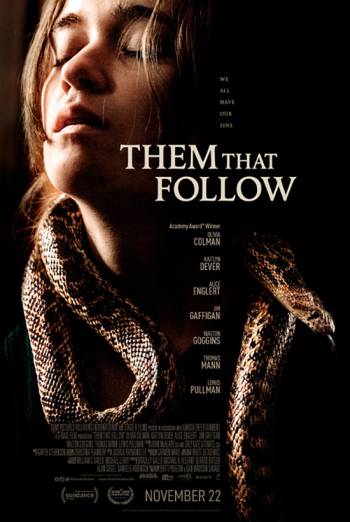 Within a remote church community in rural America, a forbidden romance forces the pastor’s daughter to confront a terrifying tradition to achieve salvation. Olivia Colman, Alice Englert and Thomas Mann star in this chilling thriller.

Despite this, she is pressured by her community into accepting the proposal of devout parishioner Garret (Lewis Pullman), much to the pleasure of her father who believes her to be a fine congregant.

Meanwhile, however, Mara has not only been sneaking around with an outsider named Augie (Thomas Mann), who abandoned the church some time ago, she’s also pregnant with their child. When the truth is discovered by Augie’s mother, Hope Slaughter (Olivia Colman), she vows to keep the secret but condemns the relationship.

As the wedding draws closer, though, Mara struggles to continue the secret romance. Augie, desperate not to lose her, attempts to re-join the congregation. But as Pastor Lemuel urges him to partake in the church’s archaic snake-handling practice, Augie’s sin is revealed when he’s attacked by the reptile.

With Mara’s blasphemous romance and pregnancy no longer a secret, her ashamed father forces her to the church to seek salvation. Presented with the same treatment as her lover, Mara must draw strength from her faith if she and her baby are to survive damnation.