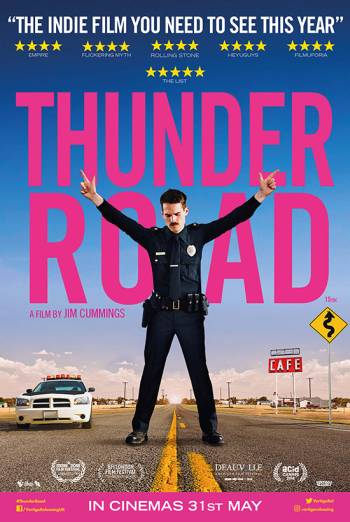 After the death of his mother, a struggling policeman also must deal with divorce from his wife and losing custody of his daughter, triggering a personal meltdown. Written and directed by Jim Cummings, he also stars as the lead in this emotional and dramatic feature is based on his award-winning 2016 short film of the same name.

As well as going through a messy divorce with his wife, Rosalind (Jocelyn DeBoer), Jim Arnaud (Jim Cummings) is struggling to find a connection with his daughter, Crystal (Kendal Farr).

Battling for custody of Crystal, Jim tries desperately to bond with his daughter. As his laboured attempts fall flat, Jim’s frustration increases when he discovers his wife’s intention to move far away and keep him out of the picture for good.

Ignoring his captain’s (Bill Wise) orders to take time off to work things out, Jim gets stuck into his job – it’s the only thing he knows how to do well. But heavy policework and dramatic events push him to breaking point.

Things go from bad to worse for the broken police officer, though, as he is falsely accused of things he didn’t do at his divorce hearing, before being fired from the force. Losing everything he holds dear, Jim can’t keep things together anymore.

Directed and written by Jim Cummings (The Robbery), he also stars as the lead in this emotional and gripping story that won the coveted narrative feature award at the 2018 SXSW Film Festival. Based on Cummings’ award-winning 2016 short film of the same name, this drama also stars Jocelyn DeBoer (Greener Grass), Nican Robinson (13 Reasons Why) and the young Kendal Farr.