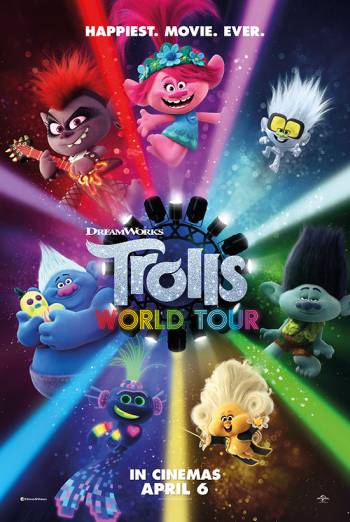 When Poppy discovers there are other Troll tribes scattered across the land, each dedicated to a different music genre, she also learns about a devastating plot that will threaten the balance of the entire world. Walter Dohrn returns to direct the sequel to Trolls, with Anna Kendrick, Justin Timberlake, and James Corden all reprising their roles.

Since defeating the Bergens and returning the land to peaceful freedom, Poppy (Anna Kendrick) and her tribe of Trolls have enjoyed comfort, making as much music as their hearts desire. However, when Poppy learns that she, Branch (Justin Timberlake), Biggie (James Corden) and their friends are all part of a wider world, all of that could be about to change.

After discovering that there are in fact five other Troll tribes out there, each devoted to a different type of music, Polly is confronted by the Queen of Rock herself, Barb (Rachel Bloom), who reveals her plot to destroy all music but Rock.

Determined to put a stop to the Queen’s devastating plan, Poppy must figure out a way to bring each of the tribes together and unite all of the musical styles. But with the Rock Trolls gaining more power by the day, it might be too little too late…

Anna Kendrick (A Simple Favor, Pitch Perfect 3, Table 19), Justin Timberlake (Inside Llewyn Davis, In Time, The Social Network), and James Corden (Peter Rabbit, Inside the Woods, Gavin and Stacey) all reprise their roles from the Academy Award-nominated Trolls. Walter Dohrn (SpongeBob SquarePants) also returns to direct this animated adventure, which features original music and is perfect for all the family.