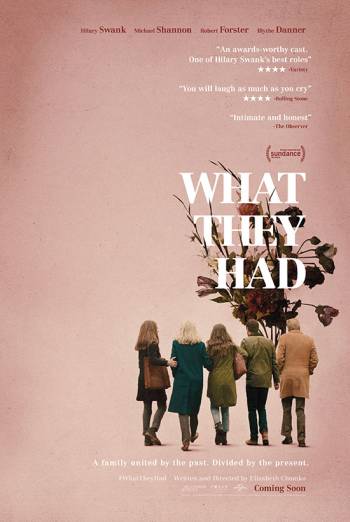 Bridget has always managed to keep a safe distance away from family struggles. But when her mother’s health becomes too much for everyone to handle, she’s forced to travel back home and confront the reality that she’s spent decades running away from. Starring Hilary Swank, Blythe Danner, Robert Forster, Michael Shannon, and directed by Elizabeth Chomko, this touching drama was nominated for the People’s Choice Award at the 2018 Toronto International Film Festival.

Bridget (Hilary Swank) is busy with her own life and everyone knows it – she has a husband and teenagers to look after, and so it’s completely understandable that she doesn’t have time to visit her parents in Chicago… At least that’s what she tells herself.

But when her mother, Ruth (Blythe Danner) wanders out into a storm on Christmas Eve and ends up in the hospital, things reach a crisis point. When Bridget’s brother, Nicholas (Michael Shannon), calls her up and asks her to come home, she knows the situation has become serious.

Ruth has Alzheimer’s disease – and it’s getting worse. Nicholas is adamant that she should move into care, and he’s hoping Bridget will be able to convince their father, Norbert (Robert Forster), that it’s the best decision for everyone.

However, Norbert isn’t ready to let go of a lifetime spent by his wife’s side.

As Bridget tries to navigate the family dynamics she’s tried so hard to avoid, she’s forced to acknowledge a series of painful truths. Witnessing the beauty and tragedy of her parent’s marriage, she begins to reflect on her own relationship, wondering if it’s possible for her to ever obtain what they had.

This touching drama explores the relationship between mother and daughter, husband and wife, and brother and sister. Director Elizabeth Chomko’s feature-length debut mixes loss with hope, and resentment with laughter to tell a story about a family trying its best to unite in the face of tragedy.

Starring Hilary Swank (Logan Lucky), Blythe Danner (Will & Grace), Michael Shannon (The Shape of Water), and Robert Forster (Twin Peaks), What They Had was nominated for the 2018 TIFF People’s Choice Award.

Get all times & tickets
All films at Westfield Stratford City
Also showing
BTS Break The Silence: The Movie