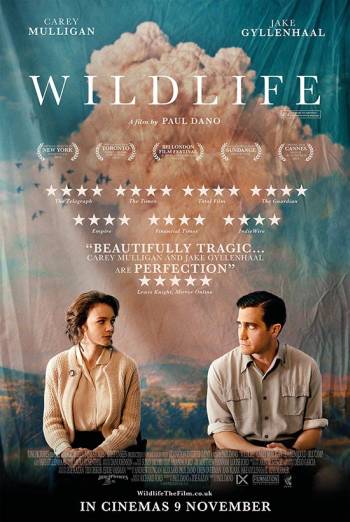 A teenage boy witnesses the slow and steady breakdown of his parents’ marriage, forced to watch them wrestle with their flaws and disappointments as they try to reconcile what they have both become. A critically acclaimed indie-drama starring Ed Oxenbould, Carey Mulligan, Jake Gyllenhaal, and Bill Camp.

Mid-century America, a small town in Montana, and it seems everything around 14-year-old Joe (Ed Oxenbould) is slowly going up in flames – literally.

A forest fire near the Canadian border has dominated news headlines, refusing to quit despite the efforts of local authorities. Closer to home, there’s a different sort of heat that’s making it hard to breathe.

All the signs are there – bedding left on the sofa, arguments in the kitchen, and silence that hangs in the air like smoke. Things between Joe’s mother, Jeanette (Carey Mulligan), and his father, Jerry (Jake Gyllenhaal), are not okay.

Ever since Jerry lost his job, the tension in the household has been mounting. Humiliated and angry, he lashes out at his wife and son until the atmosphere becomes unbearable. Until suddenly he’s bidding Joe goodbye, having taken a job up north to fight the fire.

Left alone with his mother, Joe watches as Jeanette spirals away from him in a different way, wrestling with her role as the helpless housewife. She’s trying to break free from something, and when her ‘friend’ Bill Camp (Warren Miller) invites them both to dinner, Joe suddenly sees what it is she’s struggling towards.

With both parents absent in one way or another, Joe tries to reconcile what has happened to his family. Will things will ever go back to how they were, or have they been scalded beyond recognition?

Based on Richard Ford’s 1990 novel of the same name, Wildlife is the directorial debut from Paul Dano, who has starred in acclaimed films including Swiss Army Man and 12 Years A Slave. Ed Oxenbould (The Butterfly Tree) stars as the stricken teenager, alongside Oscar-nominees Carey Mulligan (Mudbound) and Jake Gyllenhaal (Nocturnal Animals).