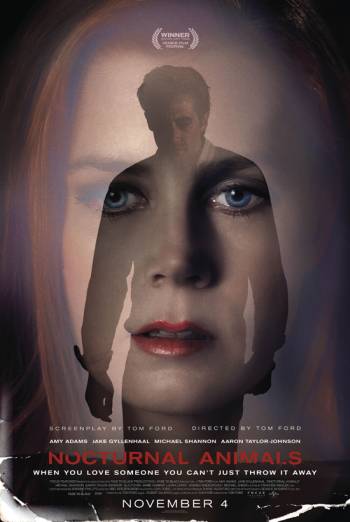 In this Golden Globe nominated film, a woman is horrified when her ex-husband sends her a copy of his manuscript, and believes the violent story is a deadly threat.

Susan (Amy Adams) is a successful art gallery owner living and working in LA, specialising in absurd, grotesque works of art. Married to the wealthy Hutton (Arnie Hammer), she’s unsatisfied with her relationship but does little to rectify the situation.

Out of the blue, Susan receives a manuscript from her ex-husband, Tony (Jake Gyllenhaal), who she has had no contact with for 19 years. The title of the manuscript, Nocturnal Animals, is a call-back to his one affectionate nickname for her.

Delving into the pages of the novel, Susan is horrified by the story within; violent, aggressive, and deadly.

Nocturnal Animals is a story within a story, as the film plays out the events of the novel alongside the real world of Susan and Tony. The film is the second of fashion-giant-turned-filmmaker Tom Ford, who stunned audiences with A Single Man (2009), and based on the acclaimed 1993 novel, Tony and Susan, by Austin Wright.

What to watch this November